By definition, rebalancing—also known as reloading—is an algorithm's ability to dynamically respond to source additional liquidity based on its assessment of the liquidity landscape after its baseline route to the “Street”.

Your rebalance logic must be SMART:

Smart algorithmic rebalancing strategies leverage knowledge of an individual venue’s microstructure, detect liquidity in real time, and rebalance to send orders to the most opportune venues while attempting to maintain queue priority in order to improve fill rates.

Ideally, successful rebalancing logic will yield improved liquidity capture—measured by hit rates (# of orders that receive a fill, as a % of total orders routed) and fill rates (# of shares traded divided by the # of shares routed).

The rebalance logic in Clearpool’s Algorithmic Management System (AMS) dynamically re-allocates shares to one or more venues in the routing protocol where an order has received a fill.

Our automated order aggregation logic, in coordination with the rebalancing logic, dynamically aggregates orders without bias and works them together to optimize queue placement and liquidity capture. Aggregating across parent orders allows liquidity sourcing from a greater number of venues and provides a more complete picture of the liquidity landscape to better inform the rebalancing logic.

In addition, the behavior of the rebalance logic can be further customized in the AMS to augment liquidity capture opportunities.

Interestingly, when executing rebalancing logic, prior performance does not necessarily predict future results and not all venues appear to behave the same. The table below illustrates why simply relying on prior fills as the only input might actually harm overall fill rates.

Although many venues attract larger and/or repeat orders in a symbol which lead to success on a rebalance, others show little to no success on a rebalance.  Some venues have a lower rebalance hit rate then the baseline hit rate—meaning once liquidity has been exhausted, it's better to simply ignore the venue.  Others have a very high rebalance hit rate despite a low baseline hit rate, which points to including the venue in the routing table instead of ignoring it altogether due to low historical hit rates. 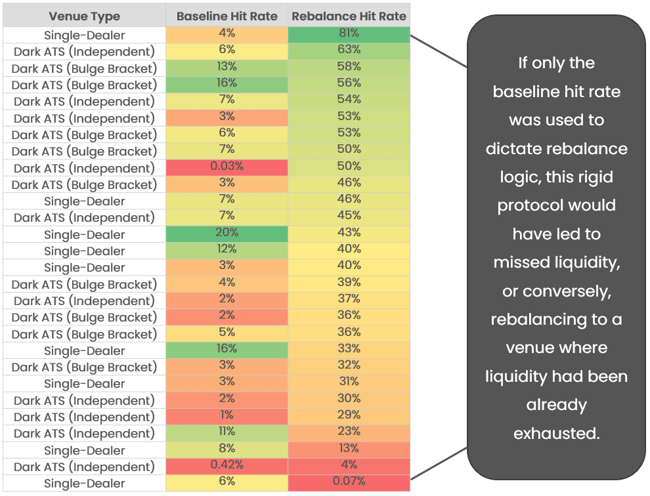 We believe our approach is more reliable for influencing rebalancing logic than other methods out there, such as static previous-fills heat-map models which can sometimes result in missed liquidity opportunities.

The show must go on….

Rebalancing is a critical part of an algorithm’s configuration. Our team of quantitative analysts constantly evaluate methods to improve the performance of our strategies. In fact, we recently partnered with a leading academic institution on a project to better understand market conditions, venue microstructure and symbol liquidity at any given time of day.

During the course of this project, we observed that decay rates— which are indicative of how fast liquidity is exhausted—range from 5-7%  in the first 500ms of a rebalance and can be as high as 12% within 60 seconds. Therefore, an algorithm that prioritizes a venue's eligibility for rebalancing based on static previous-fills heat-map models risks missing out on liquidity if it does not factor in the liquidity dynamics of different venues. 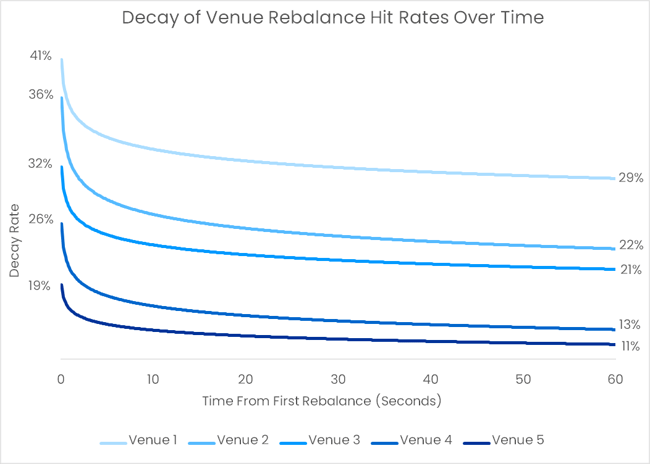 For rebalancing to be effective, algorithms must take into account each venue's probability of liquidity and rate of decay on a symbol-by-symbol basis. Then, they must have the flexibility to dynamically adjust a venue's priority in the routing protocol or systematically engage with multiple venues to maximize liquidity based on those inputs.